Somebody's at the Door - Living and Writing in Woodstock, GA 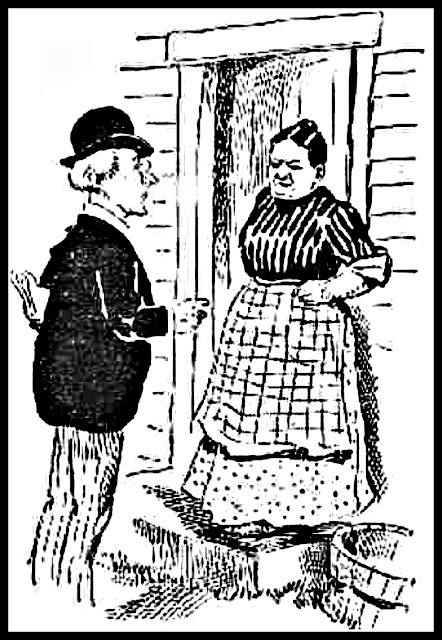 I have a very sweet husband, although the manly type. As an independent businessman, he's had people try to pull the wool over his eyes. They seldom succeeded. But throughout this same period, he's also been a "softie" to anyone selling anything at our front door, things we don't need. He feels for people striving to make a way for themselves, and he admires hard work. In regard to women these days, most make a point not to answer an unexpected, ringing doorbell.

In Woodstock of long ago, door-to-door salesmen were viewed differently by the farmer's wife. Unlike modern women, she wasn't flooded with junk mail advertising, endless internet commerce or enticing stores on every corner. In 1910 Woodstock, you could go to the Chandler-Dobbs store to buy a casket, or Haney's Store to purchase overalls. At Dean's Store you could even enjoy a fountain Coca Cola (an unopened jug of really old but bona fide syrup still sits on the shelf). Yet, a niche remained unfilled by those establishments. Earlier, beginning in 1879, the railroad made up for the lack of uncommon goods, by trickling in the occasional salesman with his satchel full of wonders able to make the daily labors and ailments in a woman's life easier to bear. Her own little bit of commerce, her egg money, came in handy. Lodging for the salesman--he had numerous farms to visit--was a simple fix: a room for rent. When money became tight, or the cotton crop failed, or the man of the house died, some of Woodstock's turn-of-the-century in-town homes made adjustments and served as boarding houses at one time or another. Outside town, women were stuck on the farms except for a Saturday trip to their modest, little city and on Sunday when they rode in a buggy the short distance to church; so they looked forward to visitors, even a salesman, who would break the monotony of their duties. Nearby, husbands or sons kept an eye out for flimflam techniques. Justice could be swift. Imagine the wares a smart salesman displayed for his potential customer. Nothing practical, like the items she could find in town. Mainly those things that would spark a woman's need for beauty, novelty and a little work relief. 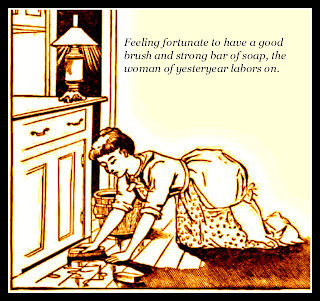 A knock at the door meant a break in her humdrum day.
﻿

All door-to-do business is not so pleasant, as you know. The charming memoir of Mary Howell came into my hands recently. Her former home is now Beverly's Day Spa, and she is still appreciated by older Woodstock natives who remember her. Others also can't help but love this woman they've never met except in her true-life story. Humble, funny, self-deprecating, she had her challenges with sales-folk, even calls herself "green," that polite country term for naive. Mary once gave money to a man who claimed he worked for a well-known department store in Marietta and was taking orders for new shoes at 25 cents a pair, hard-earned money back in the late 1920s. Actually, he fooled everyone for a day or two. Several folks decided things didn't add up, so to speak. Suspicion grew. Someone got to a rare rural phone and called the store to check his story. Then the sheriff took charge. Another incident concerned some Gypsy women who tried to fleece Mary. She was living a few miles out, in the Mill Creek area, when she fell under the spell of their unique lace doilies and table runners, although proficient at tatting, crochet and lace making, herself. I can picture extroverted Mary distracted by their fine work and a discussion of needle arts as they wormed their way inside. In her memoir, she confesses that she felt vulnerable with these "big" women inside her house. Her husband was away at the cotton gin. Eager to get them down the road, Mary made some selections and told the Gypsies she had no money, a suggestion to barter. They replied that they would take three hens as exchange. Almost robbery! Still, Mary was about to feel better as they drifted toward the door, but one of the women wanted more. Beside the pretty hens, they carried out three pints of blackberry jelly and four quarts of pear preserves.

Yes, she was duped and she'd be chuckling if she were still here, today. Obviously not one to take herself too seriously, she's given us a glimpse of the old days and we're grateful. And she's prepared us, too! I don't make preserves, and I'm not about to let go of the company's-coming-beef-roast tucked away in my freezer. I also know how to be blunt and brash when I need to be. . . .But for you: Good day, gentle reader. 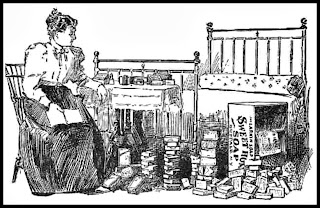 After a lack of sales and no money for his lodging, it appears a hawker of bubbles bolted during the night, leaving only a note and his poorly received product as payment. Didn't he know scented Parisian soap rather than ordinary bars from Buffalo, NY would have slowed him to a shuffle because of the resulting coinage in his pockets? Not a tale from Woodstock, but it's likely something similar occurred at one time or another. 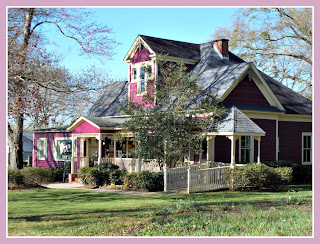 In 1935, Mary Howell and her husband, Luther, moved into town. In 1943 they purchased this home that many associate with the couple and their two daughters. Mary was involved in her church and had many friends. For a while she taught ceramics in a small studio out back.

Patti Brady is a member of Preservation Woodstock and author of the Woodstock novels.
﻿
﻿
﻿
﻿
Posted by Patti Brady at 9:00 AM