Women Drivers, Oh My! - Living and Writing in Woodstock, GA 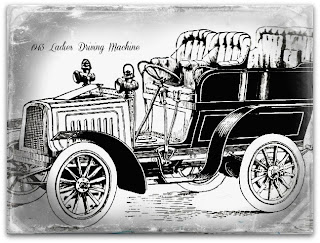 We women drivers are not so bad, really. Many are actually quite good and enjoy handling a car. A psychological study would probably show that our affinity for driving stems from all that horsepower managed by the ball of our little right foot. Yes, I'd say it's downright thrilling. Accepting our lack of big muscles, we find our enjoyment in being car-strong. Now I don't advocate speeding or reckless driving, but it is fun controlling two tons. We also happen to have a few abilities unique to women, ones that suit driving. First, who can lickety-split hull three dozen strawberries while flipping crepes in a pan? Our superior wrist agility suggests excellent steering wheel control, wouldn't you say? Second, who can step on a bug quicker that we can, which hints at our good braking reflexes. Finally, it's common knowledge that a woman can spot a child misbehaving from fifty yards away. That's why our sharp vision easily apprehends the occasional, approaching, vehicular miscreant and so we drive defensively. Just, let's curb the urge to holler some motherly correction.
Recently my habitual Woodstock inquiry revealed that women have always had a penchant for motoring. For instance, the young woman in the picture below is a good example. Delicate appearance, right? Sheltered and retiring, it would seem. Well, Edna Haney should make all capable women smile. 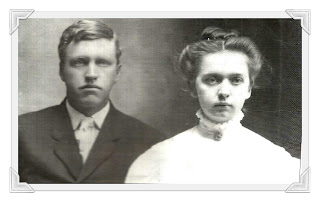 CLICK ON PHOTO TO ENLARGE IMAGE
In 1905, after her high school graduation, Edna McCleskey married Dave Haney (in photo), a successful Woodstock farmer and businessman. The old Haney home still sits on Main Street, across from Linton Street. Edna loved to take care of her family and to read. Her life was not a long one due to illness, but until then, she led a robust life and delivered seven children. According to the family chronicles, Edna was one of the first women drivers in Cherokee County, and one could speculate that she was the first in Woodstock. The record states that sometime in 1913, Dave came to the decision to buy a Model T, which came with driving lessons. He insisted the transaction would be completed only if Edna received training also. We'll never know the instigator of this stipulation, but I imagine demure-looking Edna to be the one. To my surprise, this turn-of-the-century lady became very proficient at driving. 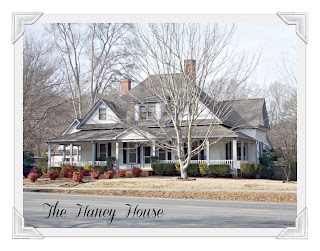 At times Edna planned trips to Atlanta where she liked to purchase cloth for sewing. I imagine Dave would watch her trundle off in the auto while he scratched his head at her willingness to launch out. It was no easy trip, traveling on rock-filled dirt roads from Woodstock all the way to Fancy Town; the journey plus errand probably required an entire day.

The Haney family history tells of one such occasion. After Edna left, the day became stormy. As the hours progressed and turned toward dusk, Dave began to worry. His Edna was nowhere in sight. The red-clay roads must have turned into sludge; and worst of all, as each tired driver neared Woodstock, he had to climb the dreaded Noonday Hill on what we still call the Canton Road. I know . . . you've never noticed that hill. That's because our modern-day automatic transmissions hardly allow us to regard elevation changes. Instead we glide in our cars upward as we listen to music or plan dinner, barely aware of the mechanical exertion taking place. Not so, in those old-timey autos.

Well . . . poor Dave probably pictured in his mind Noonday Hill and a line of automobiles as well as wagons and buggies stuck at the bottom or floundering up the muddy ascent. So he took off from Woodstock, hoping to aid his girl. The Haney history implies that when he arrived at the hilltop, the family vehicle already sat there. He must have searched for Edna because the history states that he looked down at the next vehicle climbing the slippery incline. Who was behind the wheel? His capable Edna. There she sat doing a good deed, dealing with someone else's clutch and gears and easily managing the power beneath the ball of her little right foot. . . . Oh Edna, if I had lived in Woodstock then, how I would have loved to know you.

Patti Brady is a member of Preservation Woodstock and the author of the Woodstock novels. 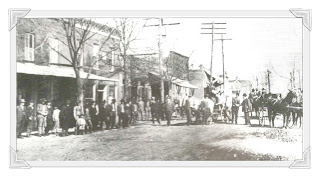 CLICK ON PHOTO TO ENLARGE IMAGE
Woodstock as it looked when Edna traveled through town in her Model T. Notice there weren't any women out. Too much work to do at home! Perhaps the poles in the background are telegraph wires.  Transmission lines for electricity did not arrive until 1925, so people relied on kerosene lanterns. Main Street was paved in 1929. The scarcity of cars and the smooth surface made Main Street a favorite place to roller skate in the 1930s. 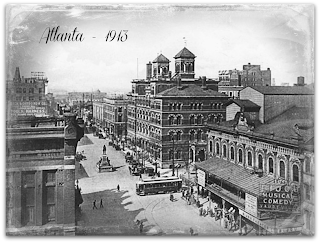 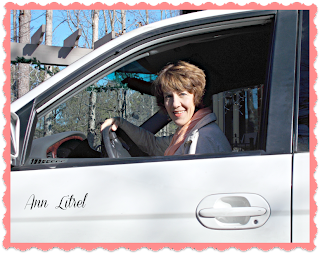 As she drives, it's certain Ann Litrel's artist-eyes are always scanning the landscape for visual inspiration. No one has portrayed Woodstock on canvas as masterfully as she has. 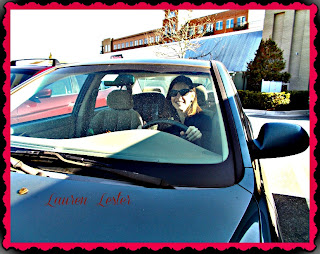 Lauren Lester enjoys the freedom driving gives her. A transplant from New York, she says the drivers here are a little more polite. Keep up the good work, gals. 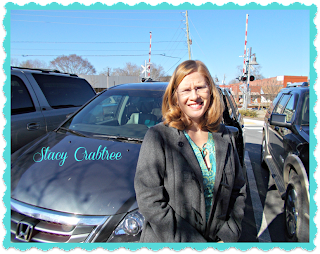 Stacy Crabtree is a hardworking, homeschooling mom.
She is an Auburn grad; the emblem shows proudly on her car. 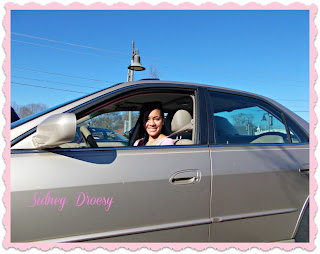 Sidney Droesy, a student at KSU, has a dog named Mojo. While driving, she listens to music but doesn't use her phone then. Smart young woman!
﻿
Posted by Patti Brady at 5:18 AM