The Thrill of the Train - Living and Writing in Woodstock, GA

Why do trains still mesmerize us in a time of space travel? Maybe it's just me who feels the magnetism, but I think other people, here, are also captivated by the sight of thousands of tons of metal rolling proudly through Woodstock. You feel that weighty passage in your feet while the roar of the engine reverberates inside your chest. Today's carrier is Georgia Northeastern Railway, but since 1879, one railroading enterprise or another sent their locomotives advancing down the track with a straight, then weaving signature before heading to Canton and beyond.


Lately our town is overflowing with celebration--the train depot turned one hundred this year. First, an art show highlighted the conventional but picturesque structure that has often captured the eye of local artists and made their hands reach for a paintbrush or camera. From the perspective of everyday viewers, the building is quaint and appealing with soft gray paint, darker trim and a coral tile roof designed in simple style except for a few curved flourishes at endpoints fashioned by some master craftsman of long ago. Smack in the middle of town, right at the crossroads, the landmark isn't easily missed. For the next depot tribute a few weeks later, the third-graders at Woodstock Elementary performed a medley of railroad songs that included Woodstock of My Heart, our favorite, new ballad. We thank you, Juanita Hughes. Those nostalgic lyrics express a longing to hear, once more, the train coming through town, blowing its familiar whistle. Soon, a soiree will be held at the 1912 depot, now a restaurant, Freight Kitchen & Tap, where a caboose is stationed close by. At that special birthday event, I hope each history-lover will consider the stories loaded into the wooden walls of that place. Emotions evoked by coming home or by leaving--joy, trepidation, sadness, excitement, fear and blissful peace--swirl ghost-like throughout those rooms that once functioned as ticket procurement, waiting room and luggage area.

What little boy doesn't love a train? Mine did. I remember pulling the car off road or easing into a parking spot just so they could watch one of those powerful machines rumble by. Maybe it was all part and parcel with the dump trucks, cement mixers and tractor trailers they revered in kindergarten; you know, something big and strong, lazily flexing its energy potential. So for two boys, having a train coming through, possibly ten baseball throws past their own backyard, fit the bill. We lived inside the city limits then. Later, nearing middle-school age, one son ventured the suggestion of placing pennies on the rails, to be flattened. You can imagine the answer of this cautionary mother. Then, a school rumor about those instantly-formed, razor-sharp discs being shot from the rails, at nearby eyeballs, quelled every boy's enthusiasm for the operation. My sons' enjoyment of the L&N continued, however. I surely wasn't about to share the story of their great-grandfather who felt penned in by rural life in Chipley, GA, which led to hopping the trains to see the entire country in 1920 before settling down. And my kids certainly didn't need to know about the time in the old, old days when some young Woodstock folk pranked the unknowing police chief by chaining the rear axle of his police car to the railroad track, then racing through this formerly sleepy town to get his attention.

Looking at our trains and depot, you might say, "So what's the big deal?" Well, I honestly don't know, but somehow those compelling machines pulling car after car add interest to my town. . . . These days, my husband and I live three miles outside the city and away from that span of railroad. During a few, cool nights this fall, I've heard the train horn blowing its mournful notes, which sail in the wind over the pines and hardwoods, all the way to our home. Indefinable emotions stir me. It is a lonely, haunting sound in one regard, yet in another, those low tones speak of movement, people, life . . . and my writer's mind happily starts spinning new tales.

Patti Brady is a member of Preservation Woodstock and author of the Woodstock novels. 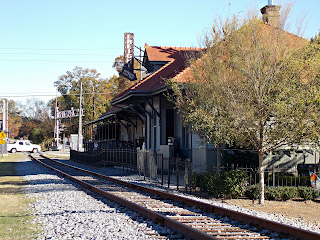 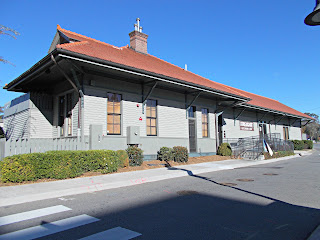 The depot entrance. Tracks were laid in 1879. The earlier depot, situated in a different spot, was torn down in 1913, approximately a year after the present one was built. A man transported the timber down the road to be used in construction of TooNigh Church of God, so spelled, back then. Nothing was wasted in those days. 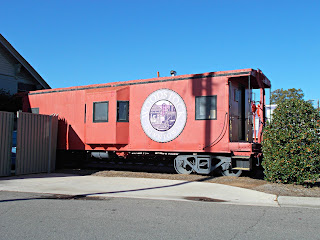 A caboose would be part of every little boy's dream playground. Some trespassing tykes had to be dragged off this one, I've heard.
﻿ 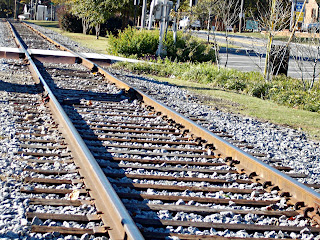 Which of our mothers didn't warn us to stay away from the tracks? None that I know of. 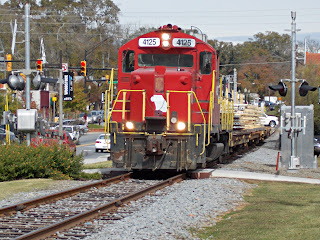 Talk about an iron will !!! 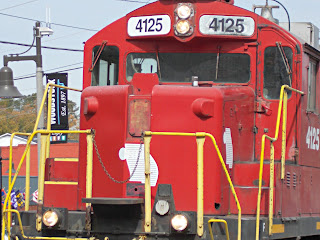 Okay, now the soles of your feet seem to be jiggling and your lungs feel kind of goofy. 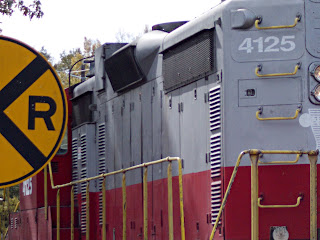 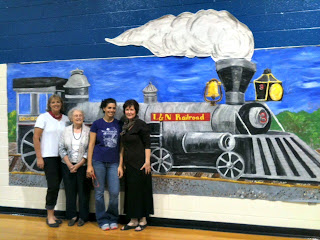 Songwriter Juanita Hughes (second from left) standing with talented Woodstock Elementary teachers after the performance of a railroad-themed medley by the third-graders. The mural depicts an earlier Woodstock locomotive. Photo by Blake Barrows.