I've noticed something about human nature. One aspect of our composition occasionally makes us wonder if everything is truly as it seems. That's how certain stories are able to tug at us and leave us eager for revelation. Sometimes the news is good. Sometimes the news is bad. In any case, mystery has power like creek mud, sucking on your waterproof boots until little water oddities swimming about captivate your thinking and you lose interest in traipsing off to dry ground.

A thrill tickles the mind when mysteries are solved, like the one cracked by our town historian. Juanita Hughes is an inquiring sort of woman, always scurrying here or there, pulled by some bit of history that intrigues her. She was designed for unraveling knots, making connections and drawing conclusions. Not so long ago, she did just that after poring over a historical document copied from a beloved, now deceased, Woodstock citizen's papers. Ms. Hughes was hooked by the description of a Civil War banner reportedly sewn by the women of Woodstock for the local military Company called Cherokee Dragoons. That word dragoons is derived from French and means heavily armed mounted troops. Despite what a few people may have imagined, today's Southerner considers the conflict to have been the South's folly. Regardless, we also believe the story  must be preserved. By the way, the report Ms. Hughes read was not signed, but she recognized the penmanship. W.H. Dean (1824-1912) physician and preacher, helped shape Woodstock, and she's read everything she can find that he wrote. When she encountered his handwriting again, the little document instantly earned some gravitas.

So where had the banner gone? Was it lost in battle where it rotted in some field? Had it burned in one of Woodstock's house fires of olden times? Might it be packed away in one of the attics of over a dozen architectural relics about town? Well . . . there were no thoughts of cie le vie in Ms. Hughes' mind. She wasn't about to let the puzzle go unsolved so easily, but all she had to go on were written details, the Company name and their motto--no picture shed light. Her determination and her awareness of the merits of internet research brought success! Who knew that the flag, donated by a descendant of the Dragoons, had been on display alongside artifacts of South and North, fifteen minutes away at Kennesaw Mountain Battlefield Park Museum. I wonder how many Woodstock natives visited the museum over the years, unaware they walked right by embroidery woven through silk by their great-great granny or long-ago aunt. ﻿
﻿﻿
﻿﻿﻿
﻿﻿﻿﻿﻿﻿﻿﻿﻿﻿﻿
﻿﻿

Now I have a little mystery for you. Many of Woodstock's increasing population are from somewhere else. It's time for them to be indoctrinated into one of the town's architectural secrets. Have a look at one of my favorite buildings below. 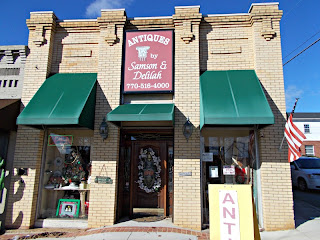 Yes, you've seen that 1908 structure with ornamental brickwork decorating the roof line, situated at the corner of Main Street and Towne Lake Parkway, across from the town mural. Our historian says one of the town's last hitching posts, positioned on the long side of the building, escaped the scrap heap until modern times. Don't you just love the name Samson and Delilah Antiques? Well, let's go inside . . . . 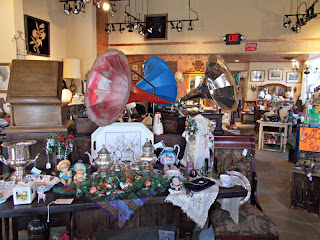 Wow. There's so much to see--those old gramophones, china of yesteryear, charming figurines, antique furniture, delicate linens and so on. The ceiling, it's so high. Everywhere I turn, there's something to snag my interest. Hours could be spent here. But wait. . . . Things may not be what they seem. I sense an air of mystery. What's that in the far left corner? Let's go look. . . . 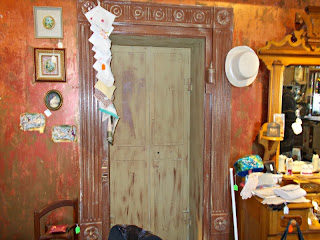 Interesting. I'm not referring to the hanging tree of hankies or the white fedora. Look instead at the elaborate metal molding of the outer door frame . . . and that strong hinge that must have held a weighty door, now gone. . . . I wonder what strangeness waits behind that inner portal. . . .
﻿

No, you haven't fallen into a Stephen King novel. . . . On the other side is a closet-size vault. Stacks of money once sat on the shelves. This turn-of-the-century building served as the town bank many decades ago, a monetary establishment  that held steady during the Depression. Now you know one of the hidden town secrets. . . . Sh-h-h-h-h. Don't tell.

.Patti Brady is a member of Preservation Woodstock and author of the Woodstock novels.
Posted by Patti Brady at 7:26 PM