The problem: I'm ambivalent about change. The words shaky, chaotic, impermanent all come to mind in reference to change. No one really likes alteration of their world. Understandably, natives and long-time residents of Woodstock have the hardest struggle. But when they look around at the positive transformation and growth of their city, smiles ironically show on their faces. Many of our late-arriving populace remain unaware how different the locale looked forty and, even, thirty years ago before the modern-day, homesteading trend took hold. The changes have hit faster than laser light and have us nervously wondering where all this is leading. Yes, humans have trouble with change, and the subject recurs as a minor theme in my Woodstock novels.

A little history: After the Indian Territory opened in 1838, settlers came to this area after participating in the land lottery. The area remained a hamlet of farmers until 1897 when townsfolk established the city. Woodstock, north of Marietta and Atlanta, was the little cousin who always tagged along, watching the big boys. The face of Woodstock stayed the same--no blemishes but those undeveloped, commonplace features were often overlooked. Then, things changed in the '70s. The transformation started about the time Dukes of Hazard revealed small-town, Southern life as having savvy and humorous sophistication all its own. Country music grew in popularity. Those songs spoke of the simple pleasures of real, human interaction between neighbors, not the brusqueness of strangers making their way in a rat race. Simultaneously, the value of nature also came to the forefront in human thinking. This city, already blessed with abundant greenery, increased its magnetism instantly and easily. The rolling hills, former pasture and farmland sparked the imaginations of home builders. Commerce moved in. Biking/walking trails appeared. Parks popped up all over. Now the notability of this town has spread, and carloads of people move here from far away. Who saw it coming?

Two wonderful changes, among a half dozen, occurred this year.


A way around the conundrum: Once in a while, you may be ambivalent about change, like me. So try this exercise. Imagine Woodstock folks of the 1800s, strolling around town through the power of a time warp. Can you see the men, smelling like the dirt caking their boots, their arms scorched by the sun, and their backs permanently bent as though they still leaned over their plow? And the women, thin as a stalk of wheat from too much work, self-consciously fingering their aprons with hands red and roughened from scrubbing lye-treated clothes on a washboard?  After these commendable people got over their shock at technology, wouldn't they be pleased by our enhancement of the city's beauty, by our respect for area past, and by our appreciation of local, God-given nature. I think so. Although the changes keep coming, and swift progress causes some of us palpitations, let's enjoy every minute in our town.

May you always love this place like I do.

Patti Brady is a member of Preservation Woodstock, and she is author of the Woodstock novels.

The Wood in Woodstock

There's nothing like a little snow to highlight the beauty of God's sculptures--the trees in our city. And we have ample. Leaves are glorious, but we often disregard those behemoth trunks and mighty wooden arms when thousands of waving, green flags compete for our attention. Last week, however, we couldn't miss those natural frameworks standing resplendent in the snowfall, gifting us with their striking beauty without our having to do the least little thing to promote it. Naturally, this started me thinking about our trees and, more specifically, the role they have played in area history. 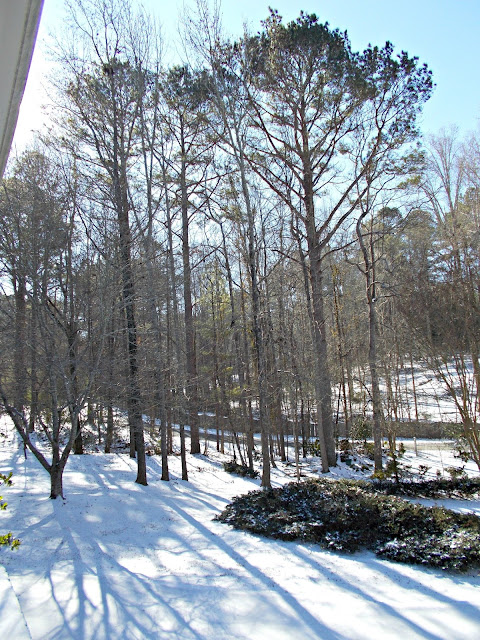 No one knows for sure how the city came to have its moniker. Some have speculated the name comes from the Sir Walter Scott novel written in 1826 and very popular at the time. Contradicting that supposition is the historical information in Georgia's Woodstock: A Centennial Tribute. It mentions a postcard sent to a Dr. Samuel Glenn in Woodstock, Georgia, postmarked 1809. This implies there was a settlement, even then, although probably tiny. So that knocks out the novel theory. Others suggest the wood-burning locomotives gave the city its name. But the railroad did not come through until 1879, and an official post office existed in 1833. Here is my guess: the plenitude of trees promised an endless supply for the pioneering people who, so inspired, easily came up with the perfect theme for this place. 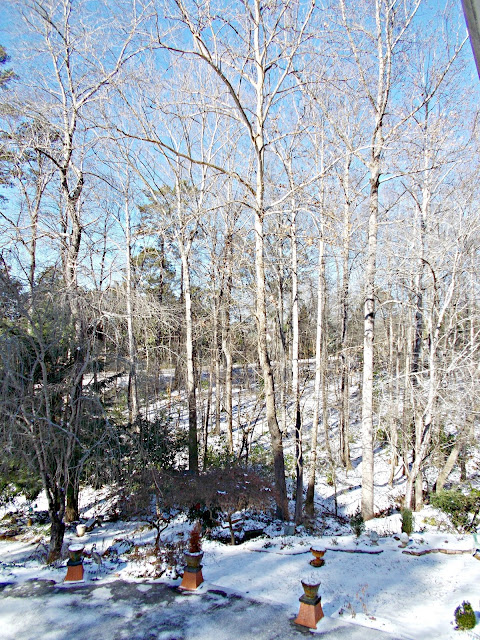 
In the beginning days, the land was thickly covered with trees and crisscrossed by Indian footpaths. This necessitated clearing trees to make roads and fields for planting. The resulting wood surplus came in handy for building log structures and keeping those simple homes warm. Along Little River, mills sprang up, and certainly a saw mill took a prime spot. A century later, wood was still in great demand. A building on Mill Street housed a planing mill run by a steam engine in 1928. Lewis Poor contributed this memory for the Centennial Tribute book: "My brothers and I always dreaded days that we had to 'offbear.' There was no vacuum system and shavings flew like a snow storm. The tin roofing over the planer was well dented due to pine knots being thrown out as the lumber came through. By the time we finished planning a load, we would be standing on four feet of shavings." 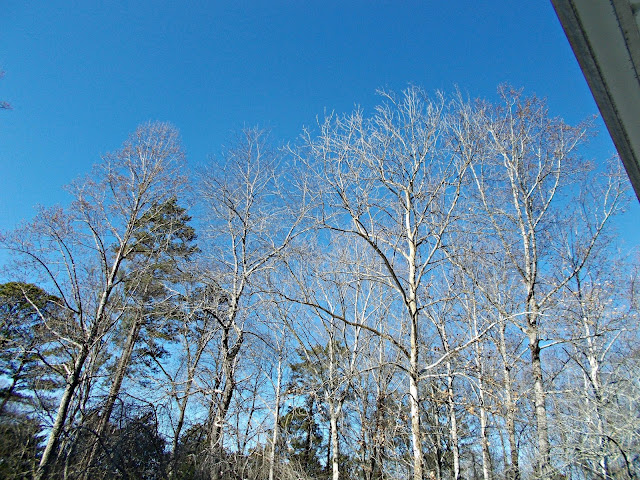 Trees make Woodstock a special place, a sheltered place, a strong place. I could not live anywhere else. By the way, I think it's no accident that trees point upward, lifting our heads from our concerns and raising our eyes to the sky.

Patti Brady is a member of Preservation Woodstock, Inc.
She is author of the Woodstock novels: The Heart of a Child and The Power of Her Smile
Posted by Patti Brady at 7:21 AM